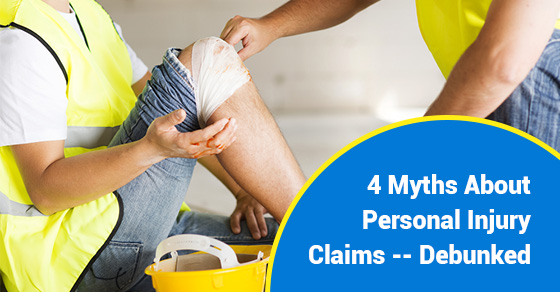 You don’t need a lawyer

This is a common belief amongst some people who have been injured. However, this is generally a myth if the goal is to get fair compensation for your injuries. While you can file your claim without a lawyer and anyone can represent themself in court without a lawyer, dealing with your insurance company or the defendant’s lawyer directly can lead to big losses on your end. Insurance companies are more likely to pay less to people who don’t work with personal injury lawyers. You may miss out on key claims for certain damages, or be unaware what the maximum possible claims and ranges of damages available under each head of damage. In settlement negotiations, usually the injured party makes the first offer. If you do not include claims for everything to which you are entitled, the insurer is very unlikely to help you out and suggest you missed anything or that you could have asked for more!

Personal injury claims have to be settled in court

The majority of personal injury cases do not go to trial. In some cases, your lawyer will have to present your case to a judge and jury but that’s rare. There are actually three stages at which a case settles. The first stage is after the at-fault party is put on notice. Their insurance company will deal directly with you or your lawyer and it is possible the case could settle at this point, before the action is issued at the court house. Secondly, if your case is initiated in court, that does not mean you will go to trial. Most cases settle without the need for a trial; at the Mediation, one of the other steps in the lawsuit, or by the parties communicating and negotiating through their lawyers informally. Only approximately 3-5% of cases filed at the court end up going to trial. If this happens, your damages will be determined by a judge or a jury.

Compensation is only for physical injuries

This is a myth that is actually dangerous because it can deter people from filing a claim. Personal injury claims can be filed for physical and psychological injuries. Anxiety, depression, and difficulty sleeping are common following an accident and you can be compensated for emotional damages too. Claims like anxiety, depression and pain are more difficult to explain to a jury than a broken bone that shows up on an X-ray. That is why it is important to have an experienced personal injury lawyer to help prove your claims.

Unlike in criminal law, for personal injury claims there are time limits on how long after an accident you have to file personal injury claims. For most cases the limitation period expires two years after you were injured. In certain cases however, you can have up to two years from the date by which your injuries met a certain threshold. In other cases, such as certain claims against the Province of Ontario, there are more stringent notice provisions.